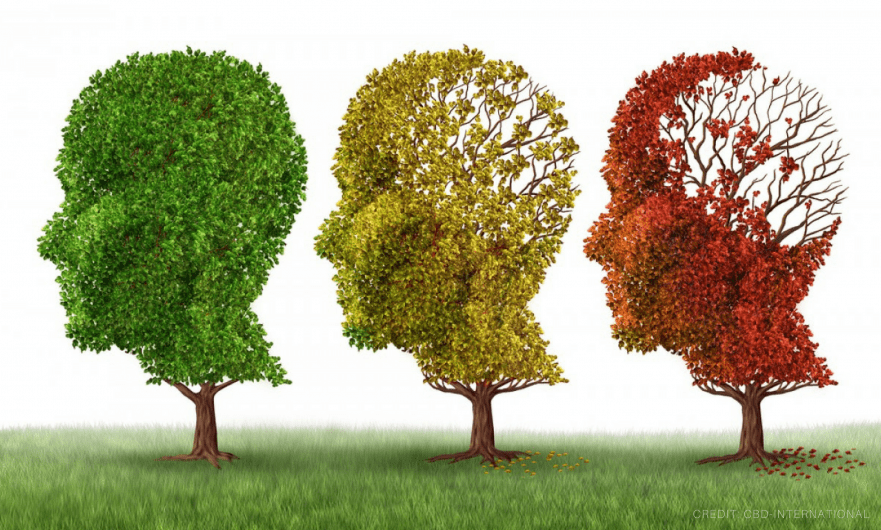 Alzheimer’s is the most common form of dementia that causes problems with memory, thinking and behavior.  The majority of people with Alzheimer’s are 65 and older but it is not to be mistaken as just a circumstance of aging.  Up to 5% of people already with the disease are known to show symptoms of early onset Alzheimer’s beginning in their 40s or 50s.

Alzheimer’s is a progressive disease.  In its early stage, memory loss is mild, but at its later stage, individuals lose the ability to carry on a conversation and respond to their environment.

The following are 10 early warning signs and symptoms. Every individual may experience one or more of these signs up to different degrees.  If you notice any of them, please contact your doctor:

Alzheimer’s and the Brain

The brain has billions of nerve cells (neurons).  Each nerve cell connects with many others to form communication networks.  Groups of nerve cells have special jobs where some are involved in thinking, learning and remembering, whilst others help us see, hear, and smell.

To do their work, brain cells operate like tiny factories where they receive supplies, generate energy, construct equipment, and get rid of waste.  Cells also process and store information and communicate with other cells while keeping everything running. These require coordination as well as large amounts of fuel and oxygen derived from what we consume on a daily basis.

Scientists believe Alzheimer’s disease prevents parts of a cell’s “factory” from running well.  They are uncertain as to where the trouble starts but just like a real factory; backups and breakdowns in one system cause problems in other areas as well.  As damage spreads, cells lose their ability to do their jobs and eventually fail, causing irreversible changes within the brain.

Keeping Your Brain Strong and Healthy

While there is no medical cure for Alzheimer’s, there are some people who have seen improvement and reversal of the disease’s effects through the help of nutrition.  We believe that prevention is always better than cure, and one must take necessary steps to keep the brain strong, healthy and in good working order, which may help to prevent or slow the decline towards Alzheimer’s and other similar ailments.  This can be done through proper diet, supplementation and lifestyle. Below are a few points that may be helpful:

Alice Howland recently turned 50, though her eldest daughter Anna would say she only looks 40.  The simple fact is that Alice appears to have it all. She’s a renowned linguistics professor at Columbia University in New York, happily married, and a mother to three adult children.

People who have it all however are also those who have a lot more to lose.  It started with some unexplained blank spots during her lectures; forgotten words, missed dates, and then suddenly she was in a state of complete and total confusion about where she was while jogging one afternoon on her own college campus.  From that instance Alice was acutely aware that her recent ‘little glitches’ weren’t simply a case of old age settling in.

“Early-onset Alzheimer’s disease,” the neurologist says, “sporadic memory impairment that’s out of proportion for someone your age.”  To Alice however, what this meant was quite simply that her brain was dying, and that it was happening quickly. Alice was to slowly lose piece by piece everything she had worked for…

Note: The above is a harrowing description of a speedy progression of Early-onset Alzheimer’s disease from the movie ‘Still Alice’ (with Julianne Moore’s masterful performance as Alice Howland).  Although the story is fictional and the progression of the disease may be much faster than normal, what Alice experienced is real and terrifying to watch.

Coconut oil boosts cognitive performance in Alzheimer’s patients and memory-impaired adults significantly, results are obvious not after days and months of treatment, but just after a single 40ml dose.

As our brain begins to age it becomes less efficient at utilizing glucose as an energy source.  Also, contrary to popular belief, the ideal fuel for our brain is not glucose but ketones. Ketones are what our body produces when it converts fat into energy. Medium Chain Triglycerides (MCT) found in coconut oil are an excellent source of ketones, and coconut oil is made up of 66% MCT.

Dr. Newport, author of Alzheimer’s Disease: What If There Was A Cure?, believes that ketones play an important role in brain health by boosting ketone levels to improve cognitive function.  Her husband showed incredible improvement in his dementia with regular use of coconut oil, and some others have shown similar improvements as well.

People who get enough niacin in their diet cut their risk of Alzheimer’s disease by 70%, a 2004 study shows.

Martha Clare Morris, PhD, of the Rush Institute for Healthy Aging in Chicago, along with colleagues studied 3,718 cases of 65-and-older residents from three south Chicago neighbourhoods for more than five-and-a-half years.  They also performed clinical tests on 815 of these people over four years.

In a published study, researchers showed that people whose diets contained the most omega-3 had the lowest blood levels of a protein known as beta-amyloid.

Beta-amyloid deposits are commonly found during autopsies in the brains of people with Alzheimer’s disease.  Several studies also suggest that high blood levels of the protein may predict Alzheimer’s disease before memory loss occurs.

There are two major types of dietary omega-3 fatty acids: alpha linolenic acid (ALA), abundant in Flaxseed Oil and docosahexaenoic acid (DHA), found in fatty fish and ColostrumX.  ALA can stabilize cognitive functions among Alzheimer’s patients and may slow the progression of the disease.

As a fat-soluble nutrient, Astaxanthin is an anti-oxidant that readily crosses your blood-brain barrier.  One study found that it helped with producing a natural form of ‘brain food’ while also preventing neurodegeneration associated with oxidative stress; Collasta Complex is rich in Astaxanthin.

Include plenty of fiber in your diet such as oat bran, rice bran or Herbal Klenz Powder.

Smoking more than doubles the risk of developing dementia and Alzheimer’s disease, according to a study published in the British medical journal Lancet.

Recent studies have not substantiated a connection between aluminum and Alzheimer’s disease, however it is still wise to avoid aluminum intake as much as possible as all metals in excess are toxic to the body.

4. Consume steam-distilled water only and drink at least eight glasses a day.

5. Our brain needs regular, restful sleep in order to function at optimum capacity.  Sleep deprivation not only leaves us cranky and tired, but also impairs our ability to think, problem-solve, process, store, and recall information.  Deep sleep is critical for memory formation and retention. If nightly sleep deprivation is slowing your thinking and affecting your mood, you may be at greater risk of developing symptoms of Alzheimer’s disease.

As daunting as Alzheimer’s and similar conditions may be, actions in our daily life such as the 5 above may play a part in preventing or slowing the progress of the disease.  Aging is unavoidable, but your health determines whether it is an enjoyable process or not. A brain-healthy lifestyle begins today, no matter what your age may be. Take action to improve your health, and may you enjoy a journey through this life filled with health and happiness!

1 10 Early Signs and Symptoms of Alzheimer’s. (2009). Retrieved from: http://www.alz.org/alzheimers_disease_10_signs_of_alzheimers.asp

COLUMN by NewLife™ panel of nutritionists

Proper nutrition is vital for those with Alzheimer’s disease. One of the primary symptoms of Alzheimer’s is excessive weight loss as the patient can literally forget to be hungry or forget to eat, and may even get confused if there are too many food choices or too many distractions around the table. Here are some things you could try: